The Barak 8 Air and Missile Defense system (Barak 8), also known as the LRSAM, is a medium-range ship-borne air defense system. The system includes a battle management, command, control, communication, and intelligence center (BMC4I); vertical launch system with Barak 8 interceptors, and a multi-function surveillance, track and guidance radar.It can fire Barak 8 or Barak 8ER interceptors for a 360-degree defense against a variety of airborne threats.

MRSAM: A medium-range, land-based variant of the Barak AMD system. The system is comprised of a command and control system, a tracking radar, and mobile launcher systems

Barak MX: A modular variant of the Barak AMD system with a flexible configuration for both naval and land use 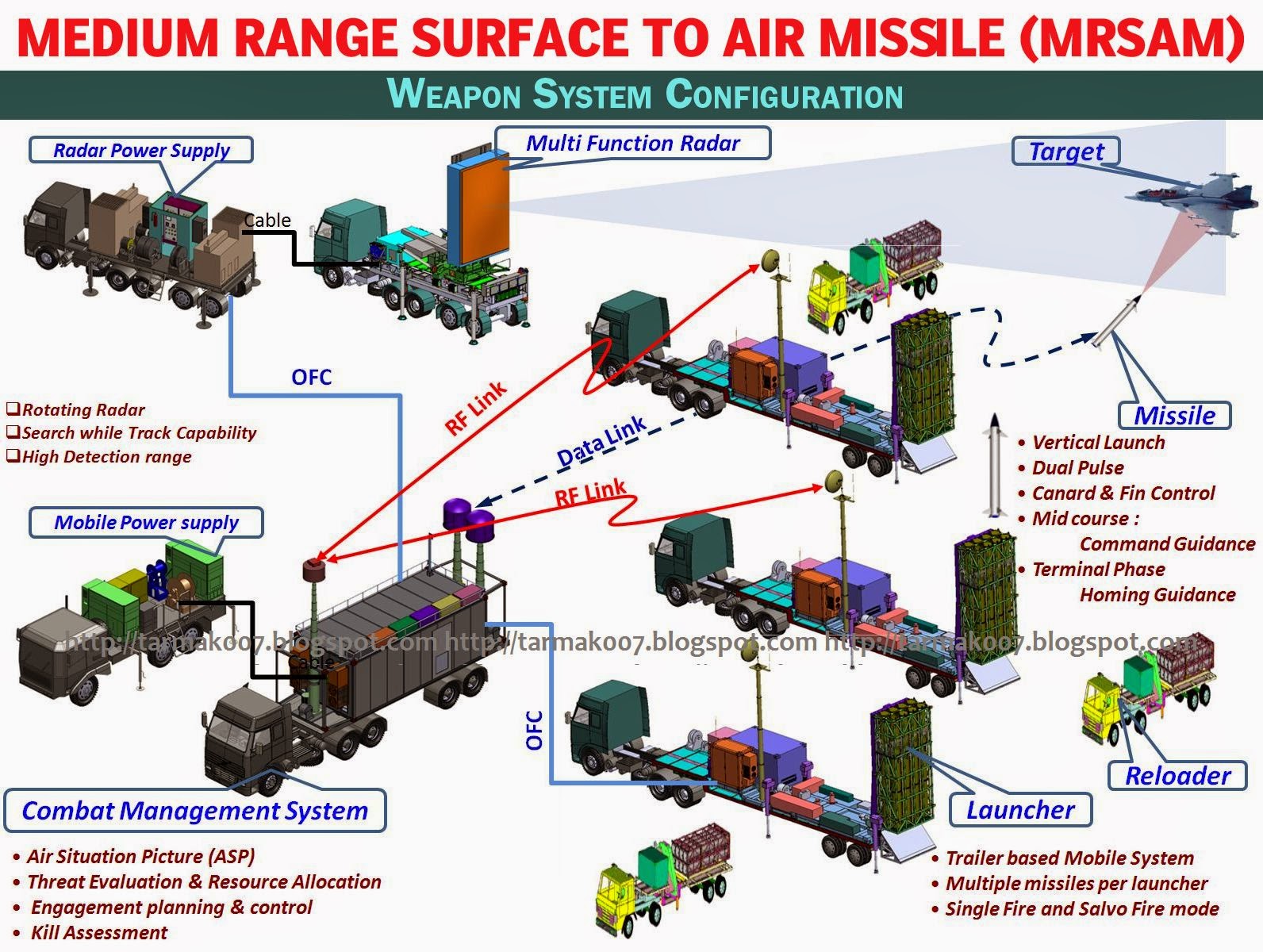 The Barak 8 is strategically valuable for both naval and land air defense purposes. It has all-weather and day/night capabilities and is capable of multiple simultaneous engagements in complex scenarios.The Barak MX variant will also be capable of providing tailored air defense at short-, medium-, and long-ranges.

The Barak-8 has been designed to defend against a variety of short-to-long-range airborne threats, including fixed-wing aircraft, helicopters, drones and projectiles. It incorporates a state-of-the-art phased array multi- mission radar, two-way data link, and a flexible command and control system that enables it to simultaneously engage multiple targets day and night and in all-weather conditions. Due to the comprehensive simulation and preliminary subsystem testing, only three flight tests are sufficient to clear the system for operational induction. Additional tests will follow the initial phase to further explore the system’s performance and capability enhancements.

The Barak 8 missile system can operate by night as well as by day in addition to all weather conditions. It is capable of successfully dealing with simultaneous threats engagements, even in severe saturation scenarios.

The system has a very short reaction time and a fast missile vertical launch capability with 360 degree coverage. The system optimizes the coordination between the missile and batteries by using an advanced broadband communication network.

There are claims that a single Barak-8 can stop a BrahMos as close as 500 m from a ship. One of the reasons behind the claims is that the Barak-8 is very accurate and has an active homing radar seeker, which enables the ship to technically forget about the missile after its launch and the missile finds the target on its own although the ship does provide guidance and mid-course updates.

Recently Armenia launched at least one Russian-made short-range Iskander ballistic missile at Baku in November during the Nagorno-Karabakh war, but it was shot down by Azerbaijan with Barak-8 missile system.

Indian air force is one of the proposed user of KS-172 and R-37. These are the long range missiles that were designed primarily for killing slower, less maneuverable platforms like large transports, refueling tankers, AWACS and other C4ISTAR platforms. But these missiles are practically useless for engaging highly maneuverable fighters because the low g-tolerance of these missile don’t allow them to do so.

By rule of thumb, an AAM needs to pull atleast 4 times more g-force than the target it is engaging, something the aforementioned missiles cannot do.

According to sources, Rafael and Raytheon are developing a Stunner (David’s sling program) based long range BVRAAM leveraging on the key technologies developed for program namely the dual seekers placed in its very unique “dolphin nose” and a triple pulse motor. So my question is what’s stopping India from doing the same? Here are few points in favour;

With Barak-8 as BVRAAM, even lower rung IAF fighters like Tejas or Mirage could kill much superior Flankers from the Eastern side at much longer distances when backed by AWACS. This could be the solution to many of IAF problems like delays in aircraft acquisition, dwindling squadron strength, less reliance on Su-30MKI, more threats neutralized with higher sortie generation.

It has been reported that an ER (extended range) variant of the Barak 8 is under development, which will see the missiles maximum range increased to 150 km. Designed to engage multiple beyond visual range threats, the low launch signature Barak-8ER is understood to retain the same autopilot/inertial navigation system and active radar seeker guidance as the Barak-8, although some modifications to the software and to the missile control surfaces are likely. The booster increases the length of the missile at launch from its current 4.5 m to nearly 6 m, although the length in flight after the booster has been jettisoned may be slightly less than the base Barak-8 missile, if a TVC is not present. The missile diameter and fin spans are thought to be the same as the base Barak-8. The booster weight is currently unknown, although the missile’s weight after the booster has been jettisoned is the same as that for the current Barak-8 configuration.

Levy said that initial operational capability (IOC) for Barak-8ER will first be declared for the naval variant, followed by IOC for the land variant. He declined to comment on a launch customer for Barak-8ER, but noted “existing Barak-8 customers will be interested in this configuration because it offers additional capability to their current system”. The missile is expected to equip the Indian Navys future Visakhapatnam-class destroyers.

MR-SAM is the land based configuration of the missile. It consists of a command and control system, tracking radar, missile and mobile launcher systems. Each launcher will have eight such missiles in two stacks and are launched in a canister configuration. The system is also fitted with an advanced radio frequency (RF) seeker.

The Indian Army ordered five regiments of this version, which consists of about 40 launchers and 200 missiles for ₹17,000 crore (US$2.5 billion). It is expected to be deployed by 2023.

1 thought on “Barak-8: The game changer for Indian Armed Force’s”