Over the past few days, controversy regarding the clash in the Black Sea, near the Crimean peninsula between the British Royal Navy destroyer HMS Defender and Russia’s border guard ships and front-line bombers has continued not over.

Despite the fact that Moscow confirmed that their patrol boat had fired warning shots, even Su-24M bombers dropped 4 OFAB-250 fragmentation bombs in front of the British warship, London still denied the above information and confirmed Make sure there are no stressful situations.

Recently, a remarkable update has come, when a photo of Russia’s Su-24 front-line bomber and Su-30SM multi-role fighter was published by the British Ministry of Defense.

While Moscow claims to have taken tough action to prevent the entry of British warships into its territorial waters, the British evidence is also quite remarkable.

A special detail is that neither the Su-24M nor the Russian Su-30SM fighter carried any weapons.

Looking at the photo above, it can be seen that under the wing of the Su-30SM fighter there are really no bombs or missiles, which leads to the question of why Russian fighters are still being brought into the sky.

Furthermore, the Su-24M front-line bomber also carries any weapons (only the external fuel tank is visible). Is this evidence for the claim from the British side, that no bullets or bombs have been dropped.

However, according to analysts, it is not clear when the above photo was taken, not excluding the possibility that after the Su-24 bombed it, it turned around again and hovered over the British destroyer, then entered the lens of sailors.

Currently, Moscow has not made an official comment on what has just been published by the British press, but it should be noted that due to the incident, Russia has sent more long-range anti-submarine aircraft to the Black Sea. 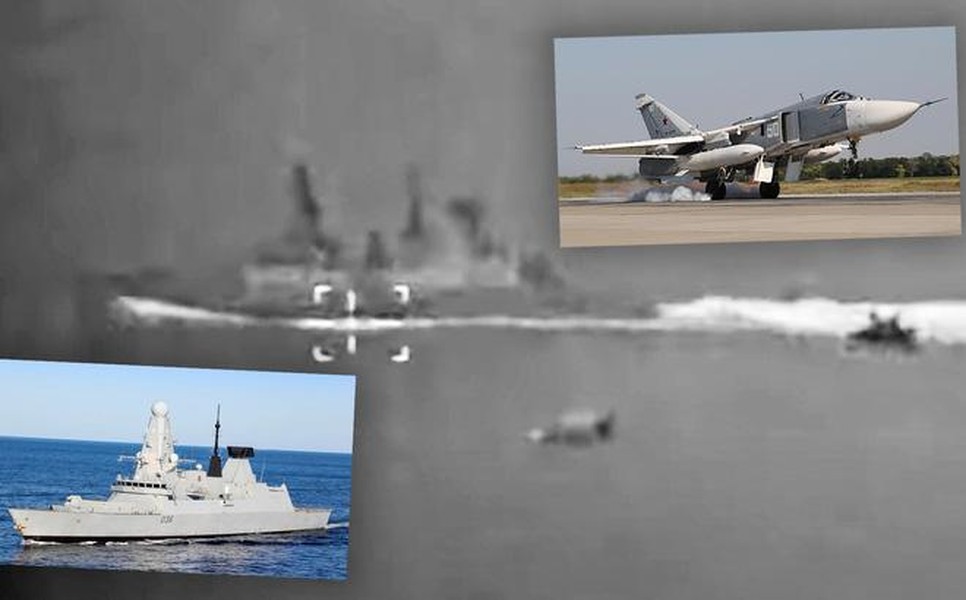 This combat vehicle can completely be used against intruding ships in the event of a repeat conflict situation, as it also carries anti-ship missiles under the wings.

In another development, Russia sent MiG-31K fighter jets and Kh-47M2 hypersonic missiles to Hmeimim airbase in Syria, a move believed to be retaliation against London.

Currently, the British aircraft carrier battle group led by the aircraft carrier HMS Queen Elizabeth is in the Mediterranean, the ship is quite likely to be seen as a “simulated target” of Russian fighter jets.

But in the opposite direction, there is another idea that the deployment of the MiG-31K with the “Dagger” missile to Syria is just a move to deter the pro-Turkish rebels in Idlib.

The Kh-47M2 Kinzhal missile is an air-launched version of the 9M723 ammunition of the Iskander-M complex, its function is to attack the ground via the GLONASS global positioning system.

Although Russia has claimed to create an anti-ship version of the “Dagger”, there is no evidence that it will be fitted with an active radar detector to fulfill the new role.