On February 6, the Russian military publication Jane’s gave an interesting assessment of the Russian fourth-generation multi-role fighter Su-30MKI, expressed by retired Indian Air Force Marshal Daljit Singh. In short, the aircraft can no longer be considered advanced, and we are talking about key performance indicators.

The Su-30MKI Flanker currently forms the mainstay of the Indian Air Force’s combat fleet, with 11 of the service’s 27 fighter squadrons comprised of the aircraft and additional squadrons planned. Currently, Indian airforce has 272 Su-30mki fighter in the inventory. The aircraft represents a significant enhancement over the original Su-27 Flanker, the Soviet Air Force’s most capable air superiority fighter which was designed to be able to counter all platforms in service in the Western Bloc at the time, and integrated new capabilities from its modern sensors, more powerful thrust vectoring capable engines and high composite airframe. The platform inherited the Su-27’s advanced air to air combat capabilities, but was capable of deploying a new generation of munitions and electronic warfare systems and had an avionics suite which not only made it more capable in an air superiority role – but also well suited to strike and maritime strike roles. Depending on its configuration, the Su-30MKI thus emerged as a truly multirole aircraft which excelled in all roles it was allocated – from a bomber using the SPICE 2000, a ship hunter or strike fighter using the BrahMos, an AWACS hunter using the K-100 or an air superiority fighter using the R-27ER and R-77.

ALSO READ:India Creating The Most Dangerous Fighter In South Asia

Better than the rest?

In the case of India, everything is even more interesting: the Su-30MKI still is the backbone of the country’s air force. Recall that India withdrew from the program of creating a fifth-generation Russian-Indian fighter based on the Su-57, previously known as the Fifth Generation Fighter Aircraft (FGFA). And the number of purchased French Dassault Rafale was reduced to 36 units: the “contract of the century” (MMRCA) ended, one might say, ingloriously. Frankly speaking, the rest of the Indian Air Force fighters, are outdated and very much. This applies to the MiG-29, and the Jaguar, and the MiG-21. Upgraded fighters still can service some more years.

“Sukhoi is definitely an excellent and powerful platform. In terms of payload and range, it is of high value, but the reality is that the program was originally launched in 1997 and since then there have been numerous technological advances that require updating for the aircraft. “

Experts believe that two key elements in the Su-30MKI, a advanced radar station, and an electronic warfare system, are lagging behind modern counterparts and require modernization. Recall that the Su-30MKI / SM radar is an N011 Bars with a passive phased antenna array (PFAR). Its basic modification was created on the basis of the N001 radar with a slotted antenna array and a bypass channel for the “air-to-surface” mode. It must be said that now in the West even fourth-generation fighters (not to mention the fifth) are actively supplying more technologically advanced radars with active phased antenna arrays, which, despite their high cost, provide higher reliability and efficiency of target detection. It was the new radar with AFAR that Singh proposed as an option for equipping the Su-30mki. However, without specifying a specific station and timing.

At the same time, issues related to the electronic warfare complex pose an even more difficult challenge, since the large size of the aircraft (in the absence of stealth technology) makes it a convenient target. The aircraft’s current electronic warfare kit is a variant of the Russian SAP-518 system, which can be supplemented with an electronic suppression container for group protection of SAP-14 aircraft. “The main purpose of the SAP-518 is the individual protection of the aircraft,” said military observer Alexei Leonkov in 2018. – The system works on the principle of a radar detector. That is, it constantly gives out distorted information to the enemy’s locators: it reflects the signal with a delay, confuses the measurement of the distance to the object, speed and angular position. This prevents the radar station from detecting targets, determining their parameters and generating the necessary data for weapons systems. ”

In general, information about Russian electronic warfare systems is contradictory and often of a propaganda nature. It should also be said that in 2017, the Ministry of Defense of the Russian Federation for the first time received the newest electronic jamming station SAP-518SM, which is intended for the Su-30SM.

And what about the weapons? Earlier, the Indian airforce complained about Russian R-77 missiles. Allegedly, the Su-30MKI, armed with R-77 missiles, could not effectively resist the Pakistani F-16 in February 2019. If the AIM-120 rocket could be launched at a distance of 100 kilometers, then the R-77 could be launched from a distance of no more than 80 kilometers. It is known that earlier they decided to equip the Su-30MKI with Israeli I-Derby missiles. According to data from open sources, the missile’s range is 100 kilometers. By the way, it was chosen as the main air-to-air weapon system for the Indian combat aircraft HAL Tejas.

The Su-30MKI strike armament looks more than solid. Suffice it to recall that recently the first squadron of Su-30MKI, armed with the new supersonic anti-ship missile “Brahmos”, entered service with the Indian Air Force. According to the media, the missile weighs 2.5 tons, has a speed 2.8 times the speed of sound, and has a firing range of about 400 kilometers. One Su-30MKI can carry up to three Bramos missiles: any Russian fighter will envy such anti-ship capabilities: even the Su-30SM, even the Su-35S, even the Su-57.

As we can see, the Su-30MKI aircraft does not fully meet the requirements of the 21st century, so it is no longer possible to count on new contracts for hundreds of aircraft. However, but it is and will remain one of the most powerful fighters in South Asia for the foreseeable future. 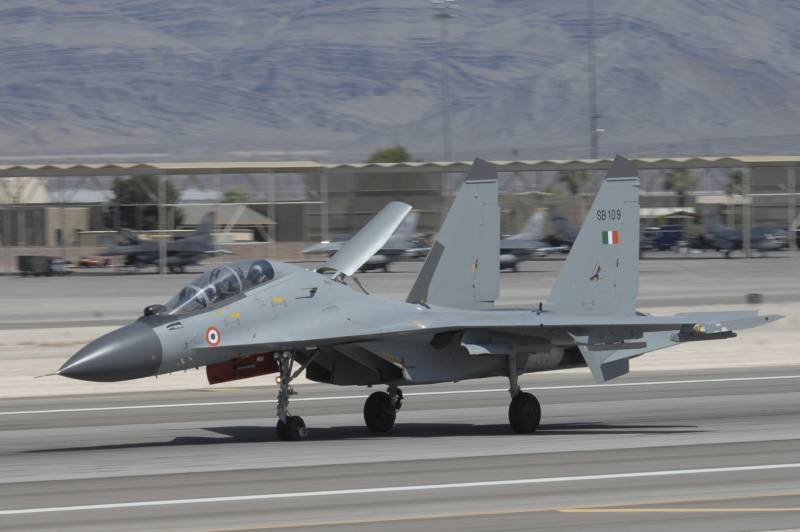 Recall that countries such as Afghanistan, Bangladesh, Bhutan, India, Nepal, Maldives, Pakistan and Sri Lanka do not have fifth generation fighters: neither their own nor purchased abroad. At the same time, the total number of Dassault Rafale is not enough for a regional “revolution”, although the machines can have their say in a local conflict.