The Ministry of Defence has placed an order for a new fleet of armoured vehicles. There are the key facts we know about the Mahindra ALSV and Kalyani M4.

The Ministry of Defence has signed a contract with Mahindra Defence System worth Rs 1,056 crore. The contract is for an order of 1,300 Armoured Light Specialist Vehicles to be used by the Indian Army. These 1300 armoured vehicles are said to be inducted into the Indian Army fleet over the course of the next four years. These vehicles are built and developed in India. Thus, the announcement is in line with the Make in India initiative promoting indigenous manufacturing capabilities of the defence industry.

Following successful tests in Ladakh, the ministry placed an emergency order for Kalyani M4 armoured vehicles earlier this year. The M4 is built in partnership with a South African defence equipment manufacturer – Paramount Group. This order is worth Rs. 177.95 crore.

The Kalyani M4 is a multi-purpose armoured vehicle that would be used for transporting troops at high altitudes in harsh climate regions. The Mahindra ALSV is said to be used for the carriage of Medium Machine Guns, Automatic Grenade Launchers and Anti-Tank Guided Missiles.

The Mahindra ALSV is an indigenously developed armoured vehicle that is available with ballistic protection up to B7, STANAG Level II. It is powered by a 3.2-litre multi-fuel diesel engine, available with a 4 or 6-speed automatic transmission. The motor is claimed to develop 215hp and 500Nm of torque. It has a top speed of greater than 120 kph and can do 0-60 kph in 12 seconds.

The 4×4 system on the ALSV features front and rear diff locks. Working with all the other tech and mechanicals, the Mahindra ALSV has a 30-degree gradability. It has a payload capacity of 1,000 kgs. The ALSV is sprung on a high travel all-wheel independent suspension with a central type tyre inflation system.

The vehicle can be equipped with a self-recovery winch. To be able to navigate through the harsh desert and dusty terrains, the ALSV features a self-cleaning-type exhaust scavenging and air filtration system. The 318/80 R17 section tyres are designed to have a run-flat distance of 50 km.

The modular design of the Mahindra ALSV allows for it to be equipped with Surveillance Configuration In-Service GPS, or feature an automatic grenade launcher or Medium Machine Gun. It also features Blast Mitigation Floor Mats.

The Kalyani M4 is designed predominantly as an extraction and occupant protection vehicle. Its design offers high speed and quick manoeuvrability. It is reported to have a maximum payload of 2.3 tonnes and can carry up to 8 people. With all the armour, the M4 itself weighs 16 tonnes. Its 43-degree approach and 44-degrees departure angle with a water wading depth of 900 mm make it ideal for tough terrain or fording rivers.

The Kalyani M4 uses a turbocharged 6-pot diesel motor which is rated to deliver 465hp and a whopping 1627 Nm of torque. It uses a CVT automatic transmission. But it also features a low-range gearbox to work with the 4×4 system to help scale difficult steep inclines. The M4 maxes out at 140 kph and its fuel tank is large enough to help it cover a range of 800 km. 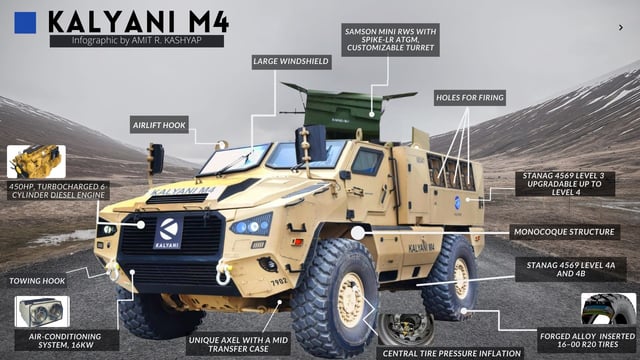