Good combat performance, low cost of operation, high durability of the fuselage, JAS-39 is considered to be better than both F-16 and MiG-29 but due to Sweden’s position in the international field influence is not so much, so it is difficult for them to sell.

The fighter is a high-quality product line with sophisticated modern aviation technology and a super expensive price. Therefore, the sale and purchase of fighter aircraft is often carefully calculated by countries. 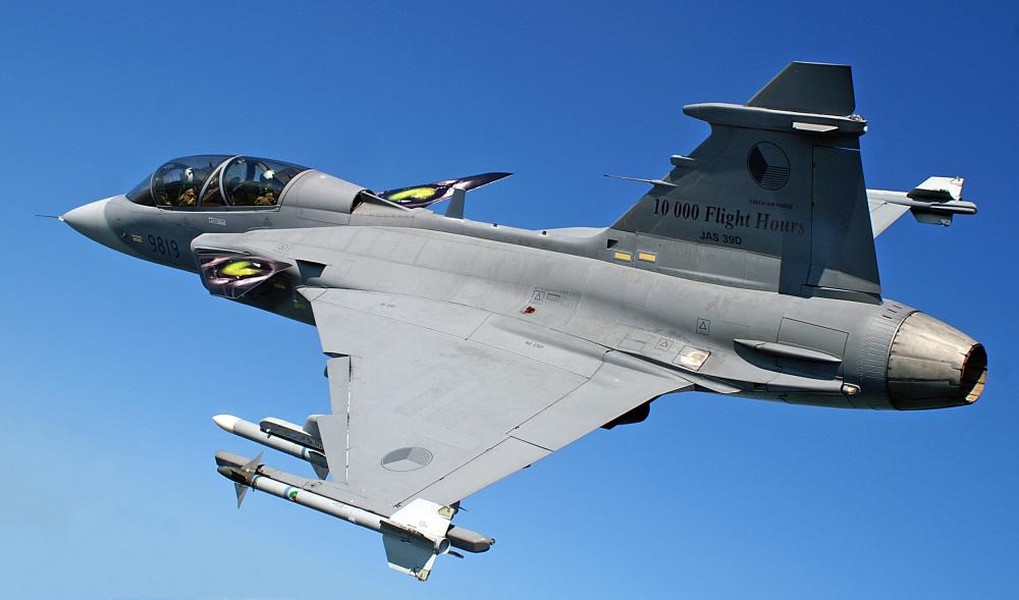 Therefore, the more manufacturing countries have a high position in the international arena, the easier it is to sell goods. In the field of light fighters, typical representatives are JAS-39, F-16 and MiG-29. However, Russian and American products are generally preferred against Swedish products.

Sweden’s JAS-39 is a formidable opponent, even in terms of overall efficiency, it is superior to the American F-16 and the Russian MiG-29.

JAS 39 Gripen is a light multirole fighter aircraft built by SAAB (Sweden) and put into service in 1995. This aircraft can both take on the duties of a fighter and a reconnaissance aircraft. 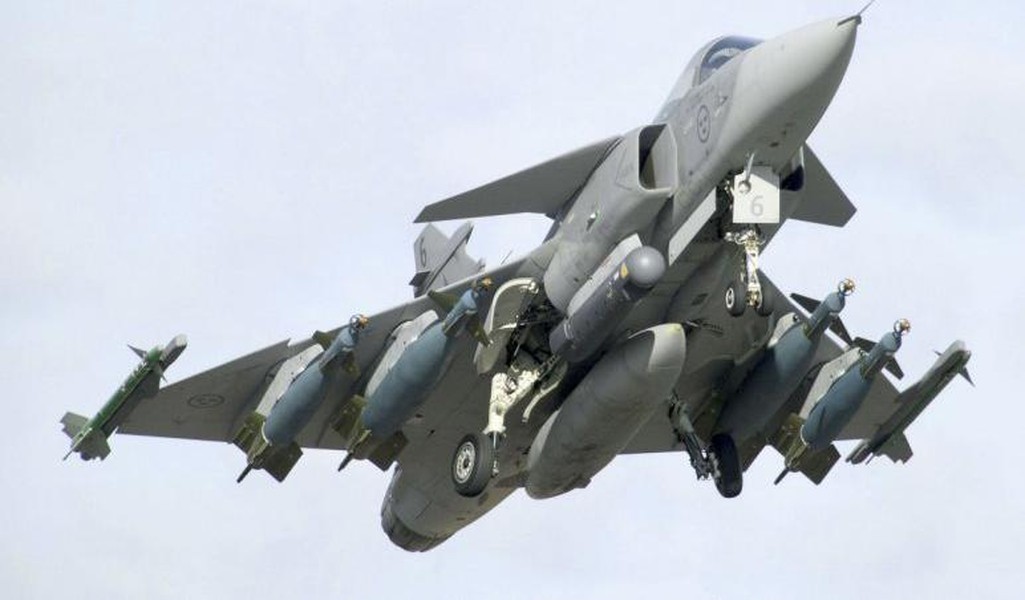 The aircraft is equipped with a powerful Volvo Flygmotor RM12 jet engine that helps Saab JAS 39 Gripen reach a maximum speed of 2,450km/h, a range of 3,250km and a service ceiling of 16km. 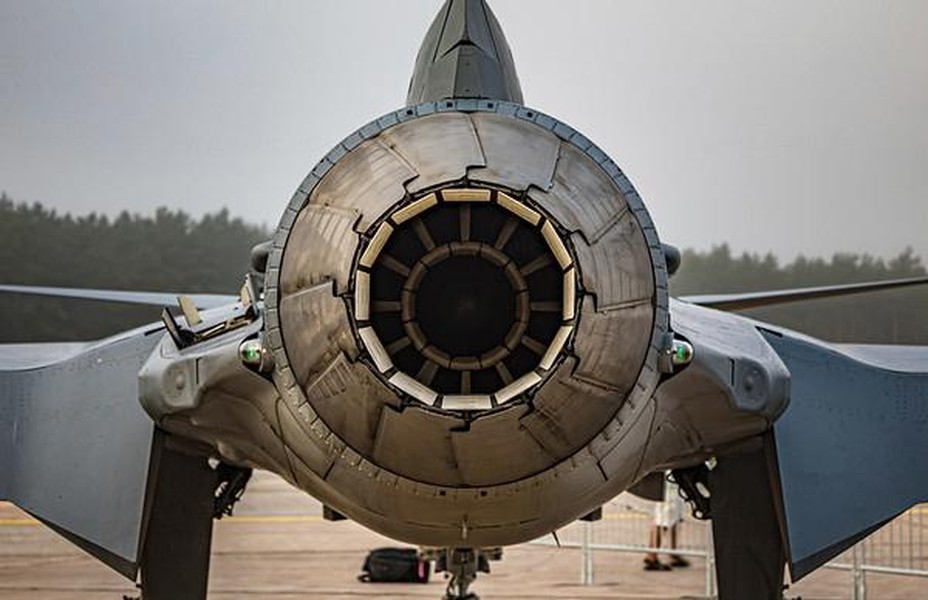 In addition, they can also be equipped with the US-made General Electric F414-GE-39E engine with outstanding performance.
JAS-39 features customization, capable of upgrading both engines and electronic equipment and weapons, ensuring not to be outdated in modern war conditions, using high technology.

JAS 39 Gripen is equipped with quite strong weapons like 27mm Mauser BK 27 cannon, in addition, they also have 6 weapon mounts that help this fighter to be equipped with a variety of missiles and bombs from the US and European countries. The special design helps JAS 39 Gripen can both fly almost vertically (create an angle of 70-80 degrees) and attack enemy targets. 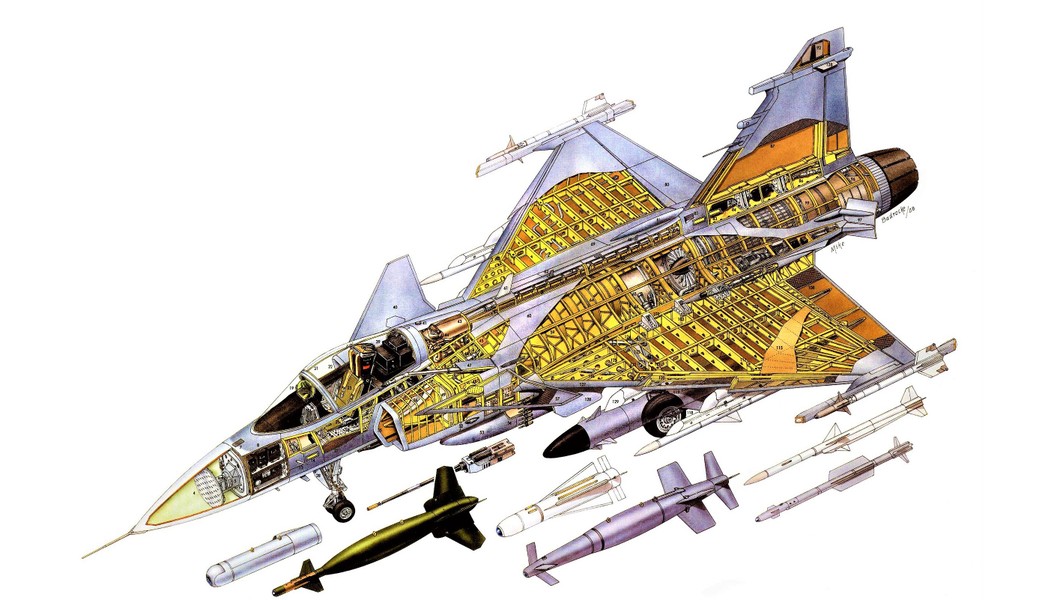 The aircraft is equipped with Esion’s avionics system with PS-05 long-range radar capable of detecting, locating, maneuvering and tracking multiple targets both in the air, at sea or on the ground in all weather conditions.

PS-05 can guide 4 air-to-air missiles at the same time to attack 4 different targets. When the target approaches the danger radius, the display in the JAS-39 Gripen F cockpit displays a warning in yellow color to give the pilot time to process. When the target enters a dangerous distance, the screen will automatically warn with the red color of the target, at the same time, a continuous warning signal is emitted, the weapon lock automatically opens to be ready. waiting for the command to fire from the pilot.

Modern versions of JAS-39 also use active electronic phased array radar for even better target tracking performance than the Su-35, the most powerful fighter jet currently in service with the Air Force. Russia.

The radar for Russia’s most powerful fighter aircraft today can theoretically detect enemy aircraft at a range of 400km, but it must be a flying target with a radar reflection area (RCS) of 3m2 or more, so detection range is reduced to 100km for light fighters like JAS-39 which has only 0.5m2 RCS. Meanwhile, thanks to the active phased array radar, the radar on the new JAS-39 can detect light fighters like MiG-29 and F-16 from a distance of more than 200km. In modern air combat, spotting the opponent first is considered the top survival factor to win.

Currently, the range of air-to-air missiles has reached nearly 200km. For out-of-sight air-to-air missiles, the NEZ (Non-Escape Zone) parameter should be taken into account, which is a term for the area in which enemy aircraft cannot use pure maneuverability to Missiles can be avoided.

Russia’s R-77 long-range air combat missile has a range of 90-170 km (with a defined NEZ range of 40 km); while JAS-39 uses Meteor missiles with a range of 185 km and an extremely impressive NEZ index of up to 100 km. Meteor is also rated superior to the US AIM-120 missile line.

Regarding the price of modern versions, the MiG-29 costs about 60 million USD, while the JAS-39’s is about 70 million USD, this figure in the F-16 version is 80 million USD.

Thus, in terms of overall operational and combat performance, Sweden’s JAS-39 is better than both the American F-16 and the Russian MiG-29. However, in popularity, the F-16 is leading with about 5,000 units produced and present in 24 countries, while the MiG-29 is 1,600 units and is used by 26 countries. This number in JAS-39 is 271 units and only 8 countries are using it.