Submarines are among the most advanced weapons mankind has ever built. Due to the nature of undersea operations, incidents with submarines often result in the death of the entire crew.

The Indonesian Navy on April 25 officially confirmed that the submarine KRI Nanggala-402 had sunk off the coast of Bali. All 53 people on board were killed.

Published photos and videos show the Indonesian submarine broken into three parts, located at a depth of about 850 meters. Indonesian authorities are currently considering the possibility of salvaging the submarine if possible.

At the moment, it is not clear what caused the ship to sink into the sea with 53 people. But this is the latest submarine tragedy in a series of submarine-related accidents in history.

Here are the worst submarine tragedies in world history, according to Business Insider.

A year later, the submarine was found in the South Pacific Ocean, at a depth of 900 meters. Argentina abandoned the idea of ​​salvaging the submarine because of the huge costs and risks involved.

In 2003, a diesel-electric submarine bearing number 361 of China encountered serious technical problems during a training. The incident caused 70 sailors to suffocate. The details are not published.

On August 12, 2000, the Russian Navy K-141 Kursk nuclear submarine suddenly disappeared in the Barrents Sea. Subsequent investigation confirmed the torpedo explosion was the cause of the ship’s accident. The first explosion resulted in a much larger second explosion, which occurred about 2 minutes later.

Most of the crew on board died instantly, but 23 people working in the stern survived the two explosions. They gather in the 9th compartment until the oxygen is exhausted and they die.

On April 4, 1989, the Soviet nuclear submarine K-278 Komsomolets crashed in the Norwegian Sea after a fire. 42 of the 69 sailors on board died. Most were burned on board, others managed to escape but died before being rescued.

On April 8, 1970, a fire broke out on the Soviet K-8 nuclear submarine. 52 sailors had to leave the ship. When the rescue team arrived, the sailors returned to the ship to wait to be towed back to base. But the ship later sank due to rough seas, killing all 52 people.

The submarine Eurydice before it crashed in 1968.

On March 4, 1970, a French diesel-electric submarine crashed in the Mediterranean. The French Ministry of Defense announced that the ship sank with all 57 crew members after an explosion occurred. Fuel and debris were found scattered across the water.

The nuclear submarine USS Scorpion mysteriously disappeared in the Atlantic Ocean with 99 crew members on May 22, 1968. No one knows what happened to the ship.

Five months later, the US Navy found the wreck at a depth of 3,000 meters, about 650km from the Portuguese Azores archipelago.

The USS Scorpion was one of four submarines that sank in a series of incidents in 1968.

A Soviet ballistic missile submarine sank in the Pacific Ocean with 98 sailors on board. Six years later, the US Navy found the submarine at a depth of 5,000 meters and secretly collected the debris. 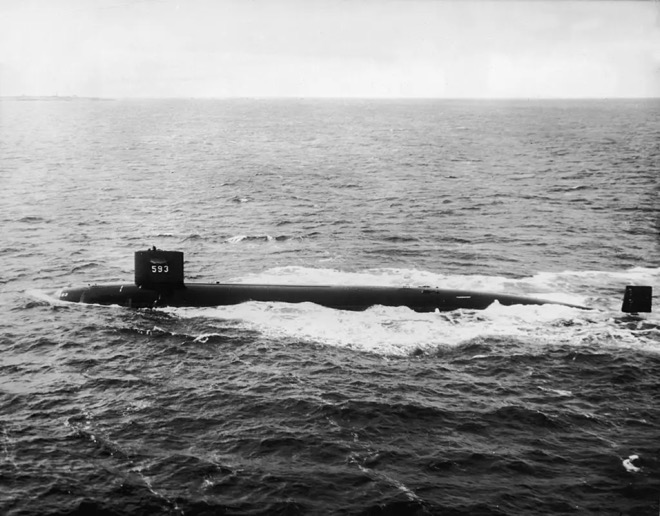 USS Thresher nuclear submarine of the US Navy.

On January 27, 1968, a French diesel-electric submarine with 52 crew members suddenly disappeared due to bad weather. In 2019, the ship was found at a depth of 2,300 meters off the port city of Toulonat.

A few days before the Minerve submarine accident, the diesel-electric submarine INS Dakar of the Israeli Navy sank in the Mediterranean, killing 69 sailors. In 1999, the ship was found at a depth of 2,800 meters. The cause of the accident is still a mystery.

On April 10, 1963, the US Navy recorded the worst tragedy with submarines. The nuclear submarine USS Thresher exploded and sank in the Atlantic Ocean, killing all 129 sailors.