China became the first client for the Russian Su-35 ‘4++ generation’ heavyweight air superiority fighter in November 2015, when it placed an order for two dozen of the jets alongside two regiments of the S-400 long range surface to air missile system. The People’s Liberation Army began to receive the fighters little over year later in January 2017, with the delivery completed by mid-2019 with two dozen aircraft entering service – enough to form a single squadron. China has previously been a leading client for advanced Russian heavyweight fighters, ordering over 100 Su-27 jets and almost 100 of the newer Su-30 platforms in the 1990s and the early 2000s. The much smaller contract for Su-35s was a result of significant advances in Chinese military aviation which had reduced its reliance on foreign designs, with the J-11B entering service in the mid-late 2000s based on the Su-27 but fielding far superior capabilities, and the J-16 joining the fleet in 2013 as China’s first indigenous ‘4+ generation’ aircraft. China’s interest in the Su-35 is widely thought to have been influenced by the need for a technology transfer from Russia – primarily technologies pertaining to three dimensional thrust vectoring engines – rather than because of a need for the aircraft themselves. This transfer was included as part of the contract.

While the Su-35 is a formidable fighter, as of 2020 it’s capabilities notably lag behind those of indigenous Chinese aircraft in many key fields. Over the coming decade the aircraft will increasingly be considered at the lower end of the Chinese fleet, particularly in terms of its sensors and armaments, which provides the PLA with a strong incentive to upgrade the aircraft domestically. The possibilities for doings so are considerable, with Russian fighters having been modified to carry foreign weaponry and subsystems in the past and the Su-35’s airframe boasting formidable characteristics. A look at four major possible upgrades is given here. One of the most outstanding weaknesses of the Su-35 relative to new Chinese AESA radar equipped fighters such as the J-10C, J-11BG, J-16 and J-20 is the limited capabilities of its air to air missiles. The R-77 was the first active radar guided missile developed for Russian fighter-sized aircraft, and while it compares favourably with the American AIM-120C and Chinese PL-12 with a heavier warhead and longer range its performance is very limited compared to newer U.S. and Chinese designs. While the American AIM-120D introduced in 2014 was intended to provide an advantage over rival designs for at least a decade, and had a formidable 160-180km range, the Chinese PL-15 notably outperformed it by a considerable Martin. The new Chinese missile not only has a much longer range, between 250 and 300km, as well as a heavier warhead, but is also guided by an AESA rather than a passive radar. This makes the missile much more difficult to jam, allows it to better lock onto stealth aircraft at longer ranges and overall provides superior reliability to the American and Russian designs. The signifiant capability gap between the Su-35’s air to air missiles and the PL-15 is thought to be the primary cause behind the Russian fighter’s poor performance in combat stimulations, and equipping it with theses or similar missiles is vital to prevent it falling behind as a growing proportion of China’s fighter fleet is equipped with the new missiles. A second option for upgrading the Su-35’s long range arsenal could be to equip it with missiles specialised in targeting enemy support aircraft such as tankers and AWACS. One option could be to equip the fighters with the Russian R-37M missiles, which with a 400km range and Mach 6 speed were designed to threaten both fighters and support aircraft but are particularly dangerous against the latter. Another would be to equip them with PL-21 missiles, which are currently being develop for the J-16 fighter and have an estimated range of over 500km The PL-21 has a number of advantages over the R-37M, which aside from its much longer range include AESA radar guidance includes a secondary seeker which uses infra red guidance for improved reliability. While it is more likely given its strengths in close range engagements that China will equip the Su-35 with PL-15 missiles rather than relying on it to hunt support aircraft over extreme distances, the possibility remains that the fighter could be relegated to such a role. 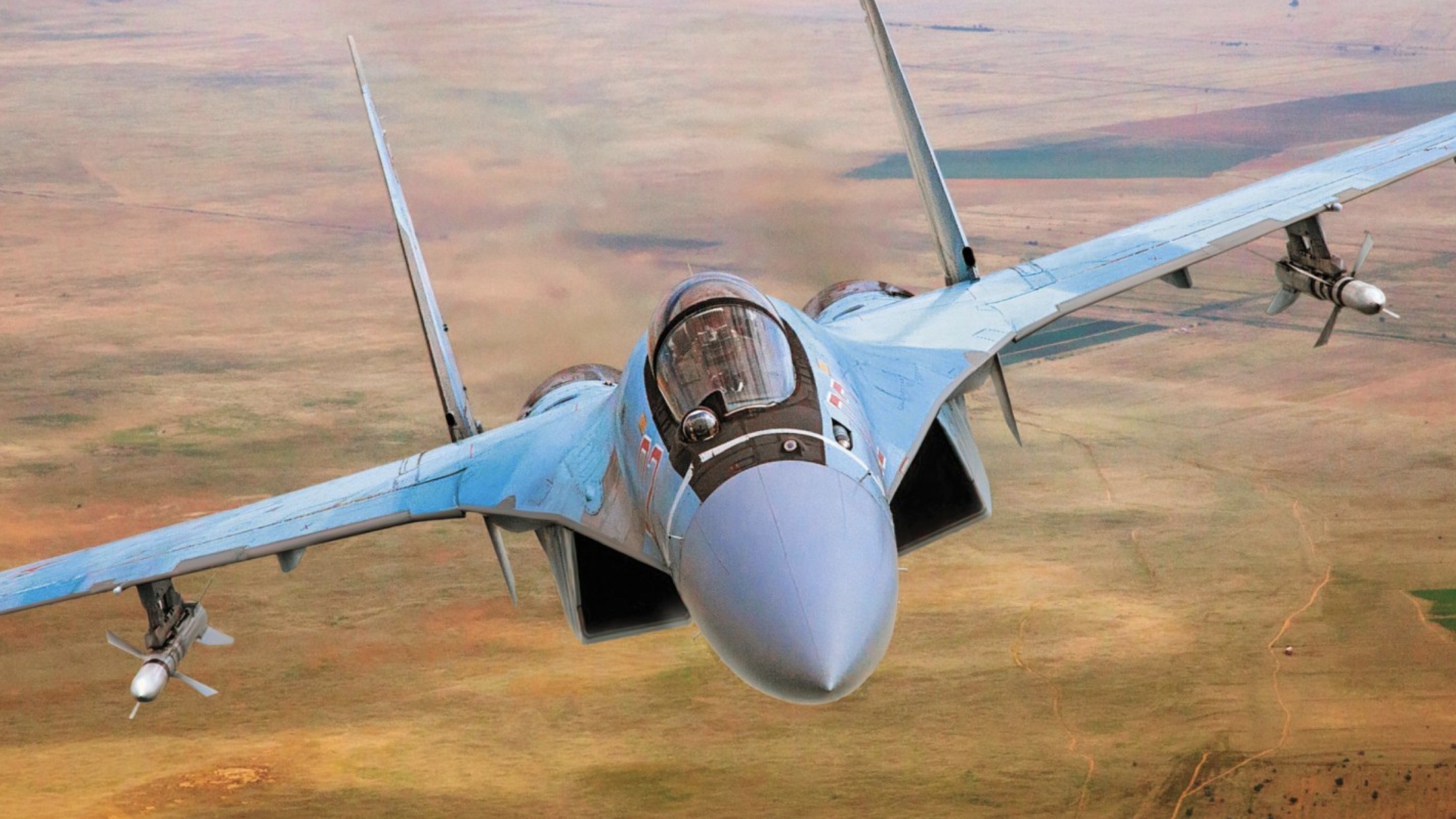 One of the Su-35’s primary shortcomings compared to its Chinese counterparts is its lack of an AESA radar, with a passive radar not only providing lower efficiency but also being much easier to jam. While the Russian Air Force is notably considering integrating an AESA radar derived from that of the Su-57 onto the Su-35 in future, China’s greater familiarity with such technologies could allow it to do this domestically at a much lower cost. The PLA began to integrate AESA radar onto its fighters from 2013 with the J-16, while the Russian Air Force would only do so in 2019 with the much smaller and lighter MiG-35 fighter – which is its only AESA-equipped fighter in service today. Chinese AESA radar technologies are thought to be considerably ahead of those of Russia, and a new generation of these radars is expected to enter service in the early-mid 2020s. These could replace the Su-35’s Irbis-E radar, which is considered the world’s most capable passive radar deployed by a fighter, and provide the Russian-built jet with far superior situational awareness and a more reliable sensor suite. Another shortcoming of the Su-35 is its reliance on the R-73 air to air missile for short ranged engagements. The design was considered the most capable of the Cold War era and has been modernised considerably since, but ultimately is far inferior to its newer Chinese counterpart the PL-10. The new Chinese missile is fitted with a multi-element infra red seeker capable of engaging targets at +/-90 degree off boresight angles. It is paired with the helmet mounted displays used by modern Chinese aircraft to allow pilots to track targets beyond the aircraft’s radar scan envelope using the high off-boresight capability, with the pilot able to lock on by simply turning his head towards the enemy aircraft. This provides Chinese jets with a considerable advantage over their competitors at close ranges, complementing the manoeuvrability advantage provided by three dimensional thrust vectoring engines The missile would complement the formidable capabilities of the Su-35’s airframe at close ranges provided by its high thrust/weight ratio and three dimensional thrust vectoring engines. China has emerged as a world leading in stealth technologies with a particularly strong emphasis on radar absorbent paints, and alongside applications on its J-20 fifth generation fighter it has also applied them to advanced fourth generation aircraft with reduced radar cross sections – namely the J-10C and J-16. These coatings at present are thought to give all of these new Chinese fighters a reduced radar cross section relative to the Su-35, and application of similar coatings to the Russian built jets would make them considerably more survivable at long ranges. Given the considerable investment in the field, Chinese stealth coatings are likely to far supersede their Russian counterparts including any coatings which may be applied to the upcoming Su-57 next generation fighter, and will ensure that the Su-35 does not have a major disadvantage in terms of stealth capabilities relative to other Chinese jets.

Ultimately with China’s defence sector surpassing that of Russia in a growing number of fields, air to air missiles being a particularly notable one, it can be expected that China will attempt to integrate at least some upgrades onto the Su-35. The result could very well be the most capable Russian built fighter ever for air to air combat – potentially surpassing the capabilities of the newer Su-57 which at least for the foreseeable future will not have access to comparable missile classes or stealth coating technologies, and which may be forced to rely on an inferior AESA radar to that provided by China’s own defence sector. Whether China will purchase further Russian fighters, with the Su-57 having a number of strong selling points including its use of hypersonic ballistic missiles and the upcoming MiG-41 hypersonic interceptor promising many unique features, further Su-35 purchases remain highly unlikely given how far behind the design is in many ways relative to the new aircraft being produced domestically.